Historic England is pleased to announce their research report on archaeological investigations at Cannock Chase is now available online.


From 2016 to 2018, Historic England was a partner in The Chase Through Time project. This explored the rich history of Cannock Chase Area of Outstanding Natural Beauty (AONB) from the air and on the ground. In particular, we were able to map the full extent of the First World War remains using new airborne laser scanning data. The project results will aid management of Cannock Chase, help to develop future projects and will contribute to a lasting legacy of archaeological investigation of this area by heritage professionals and volunteers. The lidar and results of the project are available to view via an online map hosted and maintained by Historic England.


An important strand was the involvement of volunteers. Historic England shared skills, provided training and promoted the use of non-invasive analytical survey techniques with people interested in exploring the history of the Chase.


All across the Chase, much is hidden in woodland and heath, including one of the best-preserved First World War landscapes in England. As part of the Great War centenary initiative: Home Front Legacy, Historic England undertook an archaeological survey in partnership with Staffordshire County Council, with support from the Heritage Lottery Fund (HLF). The HLF support included funding for high-resolution lidar. This allowed us to see beneath the trees, revealing an exciting range of archaeological features dating from prehistory onwards. Other sources included historic aerial photographs, which recorded archaeological remains and the changing landscape over the last 70 years. As well as the First World War, other major archaeological themes from the project included extensive medieval and later coal mining, post medieval land division associated with the early management of the Chase, and the localised concentration of prehistoric burnt mounds. 565 archaeological sites were mapped, of which 436 were new to Staffordshire County Council’s Historic Environment Record where they will be used for management of the landscape.


Historic England’s project staff would like to say a big THANK YOU to everyone who got involved with all elements of The Chase Through Time. In particular, to all of the project volunteers for their hard work and impressive local knowledge - deepest thanks to all of them for their able assistance and infectious enthusiasm!


We want your feedback! If you have a particular interest in any of the sites, techniques or themes presented in our research report, please leave a comment below.


Find out more about Historic England’s contributions to the wider project here:
https://historicengland.org.uk/research/research-results/recent-research-results/west-midlands/cannock-chase/
Posted by The Chase Through Time at 08:26 No comments: 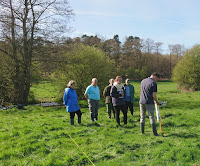 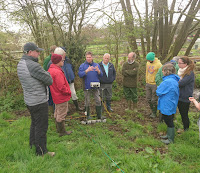 The volunteers were trained to use two different geophysical methods, earth resistance (above left) and magnetometer survey (above right) © Historic England/Cara Pearce.


The first site was a group of possible burnt mounds, expected to be of Bronze Age date, previously identified from lidar data in the eastern part of Cannock Chase. Earth resistance survey was targeted over the three most prominent mounds and the results suggested the centre of the mounds contain stony material strongly contrasting with the surrounding damper soils deposited by the near-by river. Magnetometer survey was also carried out over the site but only the mound to the south (MST999), produced high readings expected from a burnt feature. The results indicate that there are differences in the composition of the three mounds that suggests they may vary in character and origin, or perhaps some have been more heavily disturbed since they were constructed. 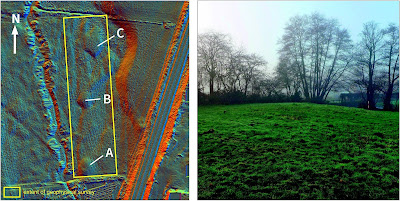 [Left] digital terrain model from the airborne lidar, showing the location of the three mounds investigated on land at Sheepwash Farm and the main geophysical survey area outlined in yellow. The jagged line running up the image to the left of the mounds is the watercourse of the Rising Brook. Chase Through Time 2016 lidar. Source: Staffordshire CC/Fugro Geospatial BV 2016 © Historic England.

[Right] A gentle swelling in the ground (about 0.5m high) shows the position of mound A (Staffordshire HER MST999), viewed from the north-east © Historic England. 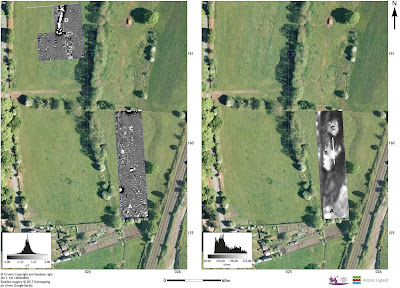 Greyscale images of the geophysical survey results from both sides of the Rising Brook superimposed on the Ordnance Survey background mapping and satellite imagery from Google Earth © Crown copyright and database right 2017, OS 100024900. Satellite imagery © 2017 Getmapping plc (from Google Earth).
Later in the week a second survey was undertaken inside the Iron Age hillfort at Castle Ring, although here the magnetometer produced weak readings that were not very helpful. The earth resistance survey was of more value, and mapped a known medieval building in the north-west of the hillfort and evidence for associated activity in its surrounds. A second possible building shown in the earth resistance data may be either a new part of the medieval complex, or perhaps a later structure related to the use of the site during the Second World War. 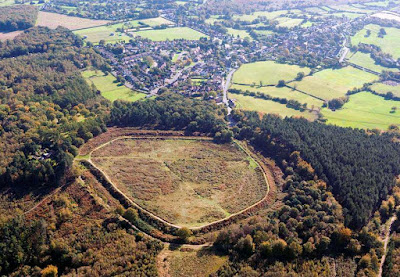 Aerial photograph of Castle Ring, taken from the north-west, with the extensive bracken vegetation cover clearly visible. The medieval building platform is visible in the foreground of the image with the village of Cannock Wood in the background (NMR_20829/52, © Historic England Archive).


A useful and interesting set of results was obtained from the data collected by the volunteers at both of the sites, and also gives us a good idea of what geophysical survey methods are best suited for future investigation in the Cannock Chase area. 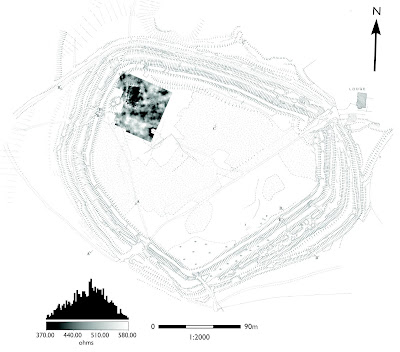 
Please note that the burnt mounds described in this post are on private land and are not normally accessible to the public without first seeking permission from the landowner. Castle Ring hillfort is a publicly accessible open space managed by Cannock Chase District Council.


We want your feedback!


If you have an interest in the study and investigation of the sites in the Cannock Chase area described here and can help by adding further supporting information then please leave a comment in the box below.


Find out more about Historic England’s involvement in the Chase Through Time project, here: https://historicengland.org.uk/research/research-results/recent-research-results/west-midlands/cannock-chase/


Detailed Historic England research reports on the two geophysical surveys carried out for the Chase Through Time project can be accessed online at:

Posted by The Chase Through Time at 07:03 No comments:


Walking east from the Sherbrook Valley towards Rugeley Quarry you are likely to come across the large banked earthworks of a number of First World War firing ranges. Located between the Brocton and Rugeley training camps, these ranges served the 40,000 men who passed through the camps at any one time, and were variously designed to be used for rifle, machine gun and pistol target practice. Whilst the First World War training remains on Cannock Chase are extensive, it was not the first instance of military training in the area. Away from the First World War complex, there is a Victorian firing range located in Etchinghill. The stop butt (high bank or wall behind the target functioning as a backstop screen to intercept the ammunition) for the Victorian range and two of the yard markers (firing points) are still visible as earthworks today. It is interesting to compare the U-shaped stop butts of ranges dating to this period with the straight broad banks typical of the First World War ranges.

Many of the First World War ranges are difficult to identify from aerial photography because the majority are situated within dense woodland. In these cases the lidar - with its ability to ‘see’ through the trees (to a certain extent) - has allowed us to identify and confidently attribute more features to the ranges than had previously been recognised. Some of the more subtle features may be masked on the ground by the dense under growth and so have, until now, been difficult to associate with the earthwork butts up to 600 yards away.

The historic aerial photography has been particularly useful. It was assumed that, as they were such massive constructions, the extant earthworks of the butts were in their original form. So, we were really surprised to see that range ‘E’, which was used up until the 1990s, has been significantly altered. If you look closely at the lidar in Figure 3, you can see the slightest traces of the original layout.

When one of the analytical field survey training weeks was hampered by Storm Doris in February 2017, we spent a profitable (though wild and windy!) morning carrying out a walkover of the rifle ranges area with project volunteers, hoping to investigate some of the complex sites which had been identified through the aerial mapping. That morning we spent time looking at the topography and how the features sat within the landscape in order to better understand how they functioned. One of the firing ranges (‘F’) we found particularly difficult to decipher from an aerial perspective because its layout was dramatically different to the rest of the ranges. Being able to walk around the site enabled us to begin to recognise how the range had developed over time, and the expert knowledge of our local volunteers pointed us towards documentary references and helped shape our interpretation of how the site functioned.


Figure 4: Volunteers puzzling out some of the features for Range ‘F’ © Historic England

We want your feedback! If you have a particular interest in First World War (or earlier) training landscapes and can help by adding further information, interpretations or examples similar to the site mentioned in this post, please leave a comment below.

Find out more about Historic England’s contributions to the wider project here: https://historicengland.org.uk/research/research-results/recent-research-results/west-midlands/cannock-chase/

Posted by The Chase Through Time at 04:05 No comments:

All volunteers will receive training and support on accessing these records through workshop opportunities. They will be contributing to work being carried out by the projects historians and historic landscape specialists.

Whether you are an early career academic or an enthusiastic amateur, volunteering to search the archives and records or assist in field surveys is a great way to build up relevant research experience and skills. There’s little better than finishing a day tired and happy knowing you’ve contributed to the broader understanding of the world around us.

Natural variations within landscape types and the intricate patterns and structures visible in aerial photography and LiDAR make computerisation of the required image analysis all but impossible; interpretation using the human eye is the only solution.A wide range and a large number of Archives and Records are available , because of this and the size of the overall task, we need help, and we are therefore seeking public involvement in our project through volunteering. Register you're interested as a volunteer online here